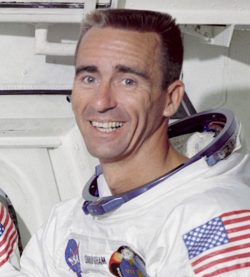 From October 11–22, 1968, astronaut Walt Cunningham occupied the Lunar Module Pilot seat for the eleven-day flight of Apollo 7, which was the first manned flight test of the Apollo spacecraft. Along with Wally Schirra and Donn Eisele, Cunningham participated in and executed a variety of critical tests necessary for the advancement of the Apollo Program during this first crewed Apollo flight. Prior to his assignment to the Apollo 7 crew, Cunningham was the backup Lunar Module Pilot to the crew of Apollo 1. After a tragic fire on the pad killed the crew of Apollo 1, the backup crew was assigned to fly the first Apollo mission. Cunningham joined the Navy in 1951 and began his flight training in 1952. In 1953 he became a Marine Corps fighter pilot and served on active duty with the United States Marine Corps until 1956 and in the Marine Corps Reserve program until 1975.