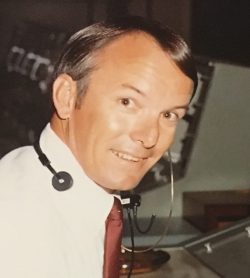 Gerry Griffin is the former director of the Lyndon B. Johnson Space Center (JSC) in Houston. In addition to his position at JSC, he also served as the Deputy Director of the John F. Kennedy Space Center in Florida and the Hugh F. Dryden Flight Research Center in California. During the Apollo program Griffin was a flight director in Mission Control and served in this capacity for all of the Apollo missions. He was Lead Flight Director for three lunar landing missions: Apollo 12, 15, and 17. During the flight of Apollo 13, Griffin led one of the teams of flight controllers who were responsible for the safe return of the astronauts.