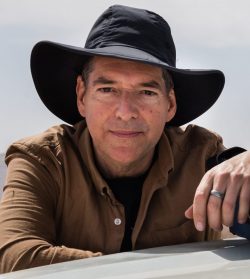 Geoffrey Notkin starred in three seasons of the award-winning television adventure series “Meteorite Men” for Discovery Networks, as well as two seasons of “STEM Journals.” A two-time Emmy Award winner, Notkin has also appeared on shows for National Geographic, The History Channel, The Travel Channel, TLC, PBS, A&E, and the BBC. As an author, world traveler and CEO of Aerolite Meteorites, Inc., Notkin frequently appears as an expert on national news shows. He is also a television and film producer including serving as executive producer for “First to the Moon: The Journey of Apollo 8.” Notkin has written many articles and books on meteorite science, paleontology, astronomy, adventure travel, and the arts and currently serves as president of the National Space Society.