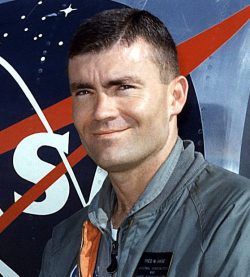 From April 11–17, 1970, astronaut Fred Haise was the Lunar Module Pilot for the Apollo 13 mission, in which the intended Moon landing was canceled because of a rupture in a fuel-cell oxygen tank in the service module. The crew, consisting of Haise, Jack Swigert, and Jim Lovell, returned safely to Earth by modifying the life-support system in the lunar module. Haise served as a fighter pilot in the U.S. Marine Corps from 1954–56. After obtaining a bachelor’s degree in 1959 from the University of Oklahoma, he joined NASA as a test pilot and was selected by NASA in 1966. After the Apollo program was canceled in 1977, Haise was assigned to the space shuttle program in which he test flew and landed the space shuttle Enterprise. Haise was played by actor Bill Paxton in Apollo 13, Ron Howard’s 1995 film about the ill-fated lunar mission.