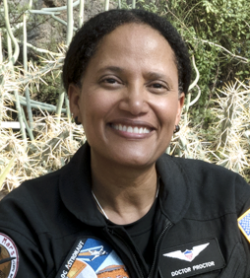 Dr. Sian Proctor is a geoscientist, explorer, and science communication expert with a passion for space exploration. Proctor is an analog astronaut and has completed three analog missions, including four months in the Hawai’i Space Exploration Analog and Simulation (HI-SEAS), two weeks in the Mars Desert Research Station (MDRS), and two weeks in the LunAres Moon Habitat. She believes that when we solve for space exploration we also solve issues on Earth. Dr. Proctor believes that sustainable food practices used in space exploration can reduce food waste on Earth. She delivered a TEDx talk called “Eat Like a Martian” and published the “Meals for Mars” Cookbook. Proctor was a finalist for the 2009 NASA Astronaut Program. Dr. Proctor holds a Master of Science in Geology and a Doctorate in Science Education.