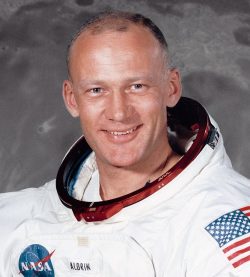 Buzz Aldrin attended the US Military Academy at West Point, earning a bachelor’s degree in mechanical engineering. Following a combat tour in Korea flying the F-86 Sabre and a tour in Germany flying F-100s, he earned a doctorate in Astronautics at MIT and wrote his thesis on the emerging topic of orbital rendezvous. Selected by NASA in 1963 for the third group of astronauts, Aldrin developed the docking and rendezvous techniques used for spacecraft in Earth and lunar orbit that were critical to the success of the Gemini and Apollo programs. On the Gemini 12 mission in 1966, Aldrin performed the first completely successful extra-vehicular activity (EVA), completing a list of complex chores and setting a new EVA record of 5-1⁄2 hours. On July 20, 1969, Aldrin and Neil Armstrong made their historic Apollo 11 landing and moonwalk, becoming the first two humans to set foot on another world. Aldrin has received the Presidential Medal of Freedom and the Congressional Gold Medal.