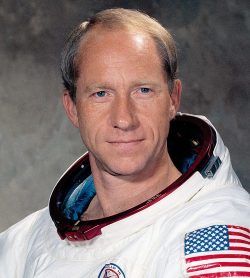 From July 26 to August 7, 1971, astronaut Al Worden served as the Command Module Pilot for the Apollo 15 mission along with crewmates Dave Scott and Jim Irwin. Worden is a two-time world record-holding astronaut: he performed the first spacewalk in deep space and was also the most isolated human in history while his crewmates explored the Moon. Worden received a Bachelor of Military Science degree from the United States Military Academy at West Point in 1955 and master of science degrees in Astronautical and Aeronautical Engineering and Instrumentation Engineering from the University of Michigan in 1963. He received an honorary Doctorate in Astronautical Engineering from the University of Michigan in 1971. Selecting the United States Air Force after graduating from West Point, Worden ultimately served as an instructor at the Aerospace Research Pilots School at Edwards Air Force Base, California. As an instructor, he trained many who would later become fellow astronauts. Al Worden passed away in March of 2020.